Multi-storey carparks are not exactly known for being aesthetically pleasing structures. But the new carpark facade design at Liverpool hospital in Sydney’s south-west suggests otherwise!

On completion, the seven-level carpark facade will not only meet all fall-protection safety codes – it will also support some striking and inspiring local artwork.

The facade work so far

Tensile was engaged as the facade contractor, with our job being to design, engineer, and supply the mesh facade and to install the artwork.

The facade consists of over 6,000m2 of Jakob’s Webnet stainless steel mesh that wraps the carpark to form a compliant safety barrier. This approach enables the creation of lightweight, unobtrusive, and low-maintenance screens that are quick to install while allowing for an open-air structure.

Webnet is also very long-lasting and robust. The mesh is made from marine-grade stainless steel making resistant to corrosion and fraying. A Webnet barrier of this kind should last 25 years or longer, making it a very cost-effective solution.

Webnet can also be utilised as a support structure for greenery (e.g. in green facades) or for artistic elements. In this installation, it will support nearly 1,800 panels, arranged to form a unique artwork display that represents the rich cultural history of the region.

The artwork was inspired by native Gandangara flowers and was developed by a First Nations artist along with elders and community members. According to NSW Health, the display will celebrate the local region’s environment and cultural diversity and will be their largest-scale commissioned artwork to date.

The carpark is expected to be completed by mid-2022 and the artwork will be installed shortly afterwards.

Webnet for carpark facades – other works

This installation, while highly unique, is not the first of its kind that Tensile has been involved in. Other similar projects include:

As well as carparks, Webnet can be used to create safety barriers and facades for bridges, multi-storey building atriums, balconies and other structures. If you have a facade project you would like to discuss, please get in touch. 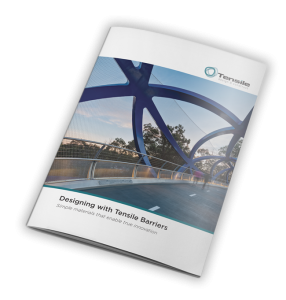 Use of Webnet Stainless Steel Mesh in Industrial Architecture