Tensile has had the privilege of being involved in some great revitalisation projects this year.

Two facade constructions of note in Sydney are the Randwick Racecourse car park and the Redman Plaza at Dee Why.

An artistic touch for a car park facade

Our brief here was to design and install a webnet facade for the new three-level carpark at Randwick Racecourse in Sydney’s east. The aim was to provide safety and fall-protection, as well as beautification through a facade feature.

The feature consists of more than 5,000 coloured discs which add a decorative element to the safety screen. The facade feature discs were made by Shapeshift.  Tensile partnered with Fitzpatrick+Partners architects and AW Edwards builders on the project. 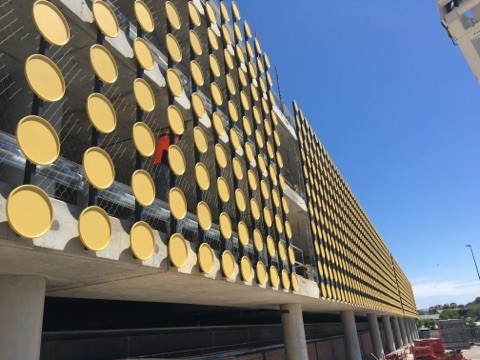 While it’s not expected to be completed until February or March of 2018, the project has passed the halfway mark, and there’s already an excellent sense of how the finished installation will look. 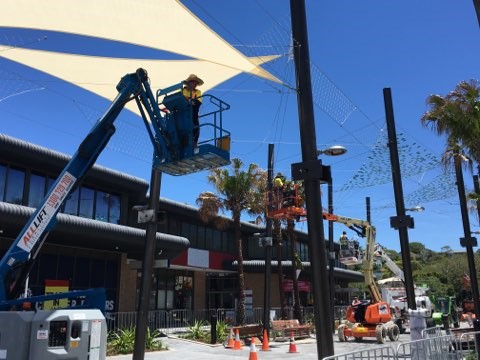 The Redman Plaza at Dee Why on Sydney’s northern beaches is undergoing renovation and revitalisation. This project includes a new public square with catenary lighting, shade structures, hanging gardens and a water feature.

Tensile’s brief was to install a mesh screen with columns for the climbing plants that will eventually be added.

Designers for the project are Tract Landscape Architects. Tract won awards this year at the Melbourne International Flower and Garden Show for their ‘Back to Babylon’ show garden – which is reminiscent of the famous Hanging Gardens of Babylon.

The many benefits of facades

Green facades bring more than just aesthetic beauty to a construction project. They can also contribute to cooling, shading, cleaner air and noise insulation. Studies show that green spaces have a calming effect on the people that use them.

In the case of a shopping precinct such as Redman Plaza, a green facade construction can help create an environment where people will want to linger longer rather than just shop and run.

For a carpark – structures known more for their functionality than aesthetics – a facade offers several benefits. A green facade for instance can help to absorb odours and pollution. An artistic facade, such as that installed at Randwick, can help to transform a structure into something pleasing and attractive while still performing an essential safety function.

To discuss a facade project that you have in mind, feel free to contact us by phone or by completing a contact form.