Numerous studies show the benefits of greenery for wellbeing. And with most of us in Australia now spending around 90% of our time indoors, bringing the outdoors inside with a green infrastructure installation can do a lot to enhance an office building.

Some of the measurable benefits of green infrastructure include improved air quality, improvements to mental and physical health for occupants, and better workplace productivity.

In an office environment, air pollution (largely from volatile organic compounds) can arise from equipment, cleaning procedures, furnishings and other sources. This can lead to ‘sick building syndrome’ – a term used to describe a cluster of symptoms without a specific cause but linked to time spent indoors. Symptoms include headaches, nausea, eye irritation, sore throat, itchiness and poor concentration.

Biological compounds such as bacteria and mould, pollutants from cars and industry and/or inadequate ventilation can also contribute to the problem of poor-quality indoor air.

Green infrastructure has been shown to measurably reduce pollutants in indoor environments. For example, test-office studies by the University of Technology Sydney (UTS) on the Junglefy Breathing Wall in Melbourne showed the following:

This is because plants have the capacity to absorb indoor air pollutants through various mechanisms. This includes absorption through the stomata during respiration, via bacteria growing on leaves, and through the plant’s root zone. 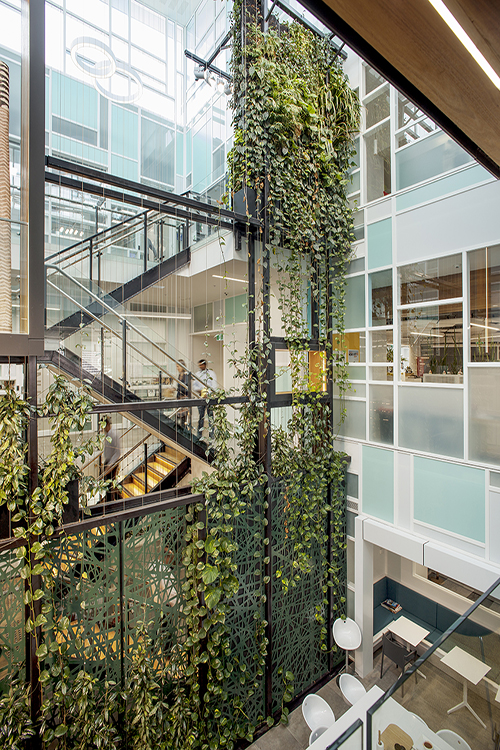 Indoor green infrastructure can help to cool indoor air through plant evapotranspiration – a combination of evaporation and plant transpiration. This can lead to a more pleasant and comfortable indoor environment as well as potential savings on HVAC.

Studies on the Junglefy Wall indicate a reduced reliance on HVAC through lower carbon dioxide levels, cooler ambient temperatures and increased humidity. So far, the research indicates that HVAC energy could be reduced by 33% for an average-sized office.

Improvements in air quality through indoor greening can help boost people’s health, and performance at work.

According to the WHO, the benefits to physical health from time spent in green spaces include better heart health, lower blood pressure, improved immunity, and reduced exposure to urban heat island effect. The WHO suggests these health benefits may also lead to healthier workforces.

Studies also show measurable improvements in mental health and wellbeing from greening. For example, in a UTS study the wellbeing of office staff was measured before and after greening of their office and in comparison to a control group.

For the control group on the other had there was no change in most categories compared to baseline measures.

Improvements in health from indoor greening may translate into better work performance and productivity. For example, a 2014 UK study showed that enriching a lean or minimalist office space with plants could increase productivity by as much as 15%. Self-reported benefits also included better concentration at work, and higher workplace satisfaction.

Stonnington Council in Melbourne had the benefits of green infrastructure in mind when it came to the re-development of staff offices. The refurbishment included a three-story internal green wall and facade, designed to improve air quality and staff health and wellbeing.

If you would like to know more about how internal green infrastructure can enhance your work environment, don’t hesitate to get in touch with us for a discussion. 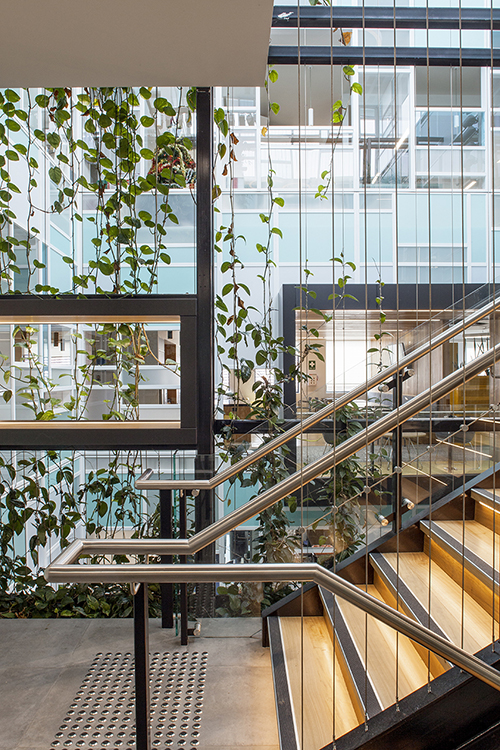